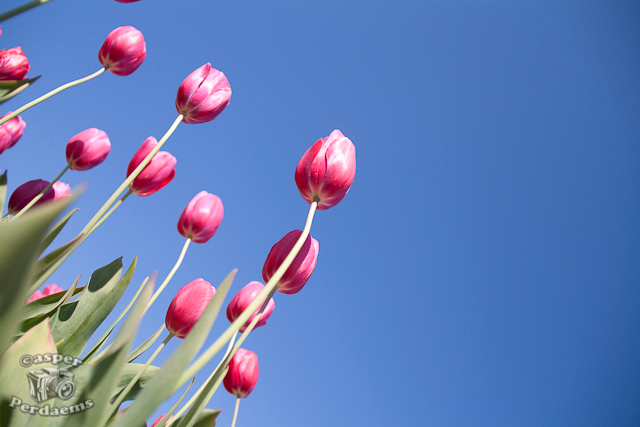 We in Holland like to call it the pride of Holland. But the tulip's origin is in Turkey.

The Tulip was originally a wild flower, growing in Central Asia. It was first cultivated by the Turks as early as 1000 AD, The flower was introduced in Western Europe and the Netherlands in the 17th century by Carolus Clusius, a famous biologist from Vienna. In the 1590's he became the director of the Hortus Botanicus, the oldest botanical garden of Europe, in Leiden. He was hired by the University of Leiden to research medicinal plants and, while doing so, he received some bulbs from his friend, Ogier de Busbecq, the Ambassador to Constantinople (presently Istanbul). He had seen the beautiful flower called the tulip, after the Turkish word for turban, growing in the palace gardens and sent a few to Clusius for his garden in Leiden. He planted them and this was the beginning of the amazing bulb fields we see today.

In the beginning of the 17th century, the tulip was starting to be used as a garden decoration in addition to its medicinal use. It soon gained major popularity as a trading product, especially in Holland. The interest in the flower was huge and bulbs sold for unbelievably high prices. Botanists began to hybridize the flower. They soon found ways of making the tulip even more decorative and tempting. Hybrids and mutations of the flower were seen as rarities and a sign of high status. In the months of late 1636 to early 1637, there was a complete 'Tulipmania' in the Netherlands. Some varieties could cost more than an Amsterdam house at that time. Even ordinary men took part in the business. They saw how much money the upper class made in the commodity and thought it was an easy way of getting lots of money with no risk. The bulbs were usually sold by weight while they were still in the ground. This trade in un-sprouted flowers came to be called 'wind trade'.

The traders made huge amounts of money every month. People started selling their businesses, family homes, farm animals, furnishing and dowries to participate. The government could not do anything to stop 'Tulipmania' the trade was all about access and demand. Finally, the tulip did not appear to quite so rare as to justify such high prices. Over-supply led to lower prices and dealers went bankrupt while many people lost their savings because of the trade. This 'Tulip Crash' made the government introduce special trading restrictions on the flower. It is said that the tulip became so popular because of its bright colours, dramatic flames and frilly petals. To have tulips in one' home was a way to impress and, when the wealth spread down the social ladder, so did the urge for tulips.

In the 20th century it was discovered that the frilly petals and dramatic flames that gave the flower its stunning look were, in fact, the symptoms of an infection by the mosaic virus. The healthy flower was supposed to be solid, smooth and monotone. The virus came to the tulip from a louse living on peaches and potatoes. Diseased varieties of tulips are no longer sold. What you find today are hybrids that look similar but are genetically stable